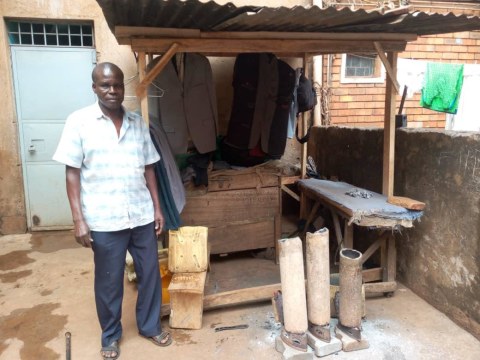 A loan helped to add working capital in his business to boost sales.

Charles is a 33-year-old gentleman who is married with one child and a dependent who is a brother that he supports financially.

He is a resident of Mafubira, Jinja district and a good client at Ugafode Microfinance Limited, this being his third loan.

Charles sells men’s clothes and also does ironing from the town market as his main source of income to sustain his family needs.

He works from Monday to Sunday and he is so hardworking, committed, honest and loyal in all that he does. His customers are people around Jinja Town.

Charles approached Ugafode Microfinance for a credit relief and he wants to use this loan to purchase more stock to resell and earn more income and also move towards achieving his future plans, since he hopes to also start selling clothes for women and children for more income.

He awaits a positive response from Kiva.