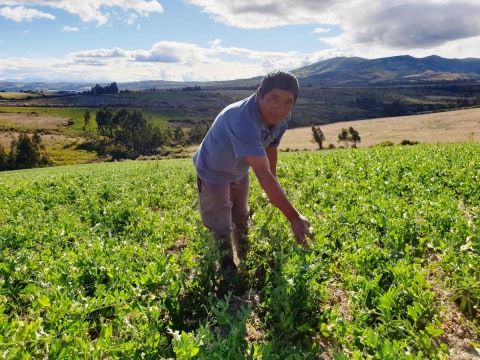 Elver is 40 years old. He is a hardworking, honest, and responsible man who has been working on a farm for 17 years. Elver lives there with his 16-year-old son. Elver is married, but he is in the process of separating since his relationship with his wife did not turn out well. He is now looking forward to moving ahead with his son.

Elver has worked in agriculture his entire life. After suffering a few potato crop losses, he chose to plant peas and onions so that he could recover financially. Elver needs to pay a few expenses to maintain his crops, but he lacks the money. For this reason, he is requesting a loan of $1,000 to help cover the cost of farming supplies for his crops so that he can achieve good production.

In the future, Elver aspires to acquire a motorized pump so that he can irrigate his crops. He also continues to strive toward building a house of his own.