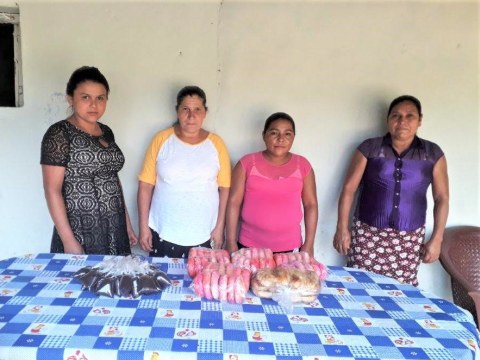 A loan helped to buy corn and firewood.

Gonzalina, 54, is currently single. She has six children, all of whom are now adults. She makes a living preparing nacatamales and bread. She has known how to do this work of making bread and nacatamales since she was fifteen years old because she helped her mother who made these products, but she generally made them for her own consumption.

Five years ago, she found out that she could make a business out of this work and she began to make bread and nacatamales to sell. She began with her own efforts and with the help of her six children who collaborate economically. She applied for a loan with Fundenuse using Kiva funds to buy corn by the quintal and firewood by the cart load. This will give her a better price and bring more profits, as well as providing the raw material in case the product becomes more expensive.

Her next goal is to improve her oven for bread-making and build a water storage basin in her house and to make future improvements to her home. She belongs to the "La Esperanza de Villa Nueva" communal bank with Julia, Scarlen, and Maykelis.