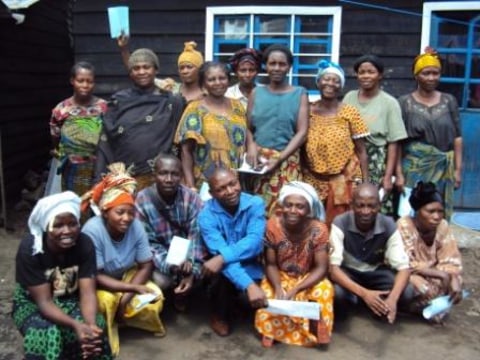 Ms. Bubenga A. is the president of the loan group Umoja ni Nguvu. (She is the one in the photo with her hand raised and her loan contract in hand, in the background). She is a 4th loan cycle client, aged 46, widowed, and the mother of two daughters, both of whom have their own homes already. The daughters are appropriately pursuing their education with the support of their husbands. Widow Bubenga's husband died in 1994 due to his family's ignorance and carelessness. Bubenga says that, instead of going to get care at a regular hospital, her husband's family had favored taking her now deceased husband to a féticheur marabout (traditional practitioner), which complicated his health situation, leading to an early death. Widow Bubenga sells vegetables: sombe (cassava leaves), spinach, amaranth, tomatoes, eggplant, etc. She displays her produce at the small market of the Mapendo-Birere district and sometimes in front of warehouses or outlets. She started her small business with her own funds. Her initial capital was $70. Then, she was informed about the micro-finance institution Hekima, which lends to the poor without collateral. From that, she got her first boost loan. With the loan from the MFI Hekima, she would like to increase her sales by buying vegetables she will be able to resell. The big challenge she faces is variability; that is, there is a big difference in prices, such that, during the rainy season, prices plunge, given that vegetables are plentiful on the market. During droughts, there is a shortage of vegetables. Despite this, consumers (customers, people) will still buy, and Bubenga will derive as much profit as she can. Widow Bubenga came to the decision to watch over her biological mother (her daughters' grandmother), who is now very old. She remains at her side to attend to her and to care for more struggling orphans in her extended family. As much as her sales are increasing, she would prefer switching her work to supplying pagnes (clothing of Congolese women) in the city of Bukavu, the capital of the province of Sud Kivu. Moreover, Bubenga would like to build a house in the future on her parcel of land located in the outer district of Goma City, in Ndosho (Kiziba II), and then rent it out. This would bring in money. Widow Bubenga thanks the MFI Hekima for the loans she receives with no collateral at all. Because of these loans, she is managing to provide for her family, and her business is really prospering. She says, "May God bless the MFI Hekima." This group, Umoja ni Nguvu, is composed of fifteen members, mostly women.