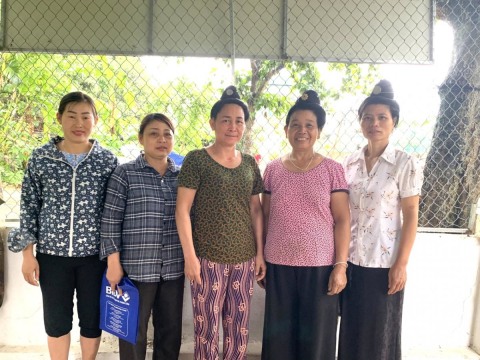 A loan helped to buy fingerlings for raising.

Mrs. Vinh is a 47-year-old Thai ethnic woman who is married and has two adult children. Her daughter is 31 years old and married, while her son is 29 years old. Her family lives in a Thai traditional stilt house in a remote village of Dien Bien province, where agriculture is the main income-generating activity of the locals. Mrs. Vinh is trusted by the villagers here to be the chairman of the commune women's union.

In addition to working in the commune, Mrs. Vinh also works with her husband in agricultural production with some activities such as growing rice and grapefruit, and raising chickens, ducks, buffaloes and fish.

In order to expand the breeding model, recently she decided to take her eighth loan at the Anh Chi Em program after successfully repaying the previous seven loans. Mrs. Vinh hopes that those fish will grow up fast and healthy so that the profits will come, and she can use this income to cover her life expenses.

In the picture, she stands first on the right.