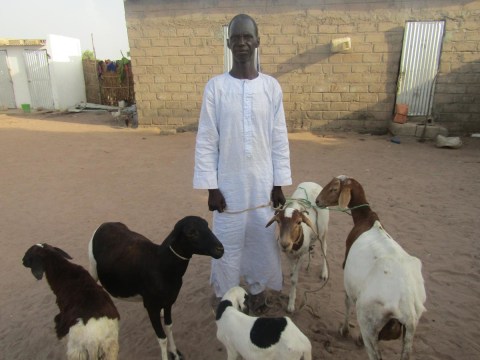 A loan helped to buy sheep for resale.

Mr. Amath is the president of the « Fede Diam » group. In French this means « Bonjour ». he is 50 years old and he is a livestock farmer. He is married with seven children aged between three and 20 years. Five of them go to school. This loan is for all members of the group, which is made up of 11 people, seven women and four men. The loan is for all to develop their activity.

Mr. Amath has been working in livestock farming for 17 years. He plans to buy sheep, animal fodder and vaccinations. He buys his stock at the weekly markets locally and in the villages of his commune. He sells them after fattening them up, during festive periods and occasionally at the same markets and in the neighbouring villages.

He has borrowed money to reinforce his business and increase his income. The income that he makes from his business enables him to cover the expenses for the family (health, food, education, hygiene, etc.). His ambition is to have a large herd of sheep for himself and his children and to become a great shepherd of national renown. The difficulties that he comes up against are often linked to sheep thefts and rivalry.