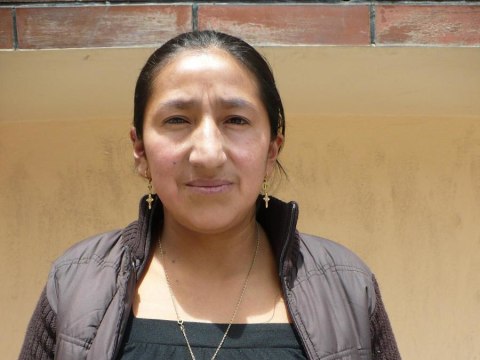 Blanca Gladys G. is a member of the San Pedro communal bank. She lives in the community of the same name in the parish of Victoria de Portete, located in the southwest part of the canton of Cuenca. It is bordered in the north by Tarqui parish, in the east by Cumbe parish, in the south by the edge of Girón canton, and in the west by San Gerardo parish in Girón canton and Baños parish. One nearby attraction is El Portete de Tarqui, where there is a beautiful monument in honor of the heroes of the Battle of Tarqui, which took place on this site between the Peruvian army and the Ecuadorian army commanded by General Antonio José de Sucre. Blanca is 36 years old and married. She is the mother of three children, aged 17, 15 and 4. Her two older children work in a vulcanizing plant, and they help a little with the household expenses. Her husband is a mason by trade, and he is currently building a house for the family. They are living in rented quarters for the moment. Blanca embroiders skirts; it was her father who taught her this attractive skill. She is also a domestic worker, and she works from Monday through Friday from 7:30 a.m. to 4:00 p.m. Sometimes she is even called in to work until Sunday. She is in her fourth loan cycle as a member of the communal bank, to which she was invited by her mother. The loans have been beneficial for her skirt business. The new loan will be invested in purchasing pigs, chickens and animal feed to start a new business. Her goal is to be able to have a store where she sells her skirts, and she hopes that God will grant her health so she can help her family get ahead.