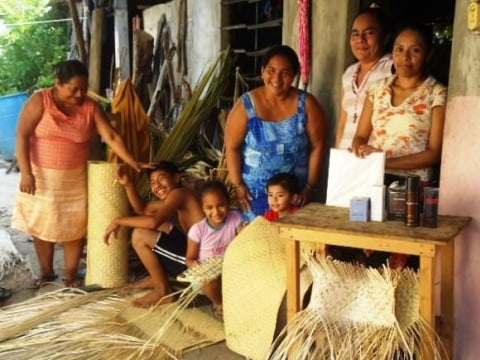 The Santa Cecilia Group is named after St. Cecilia, the patron saint of music, since they are a cheerful group that enjoys music. The group consists of four women from the village of Tapotzingo in Nacajuca. Doña María DomitiL. is the group representative and sells shoes through a catalog. Doña Sara sells snacks. Doña María Concepción sells “petates” (handwoven bedrolls). Doña María del Rosario manages a grocery store.

“I enjoy making things by hand,” says María Concepción, who is known as “Doña Concha” within the community. She has four children, one of whom helps with making the bedrolls (as shown in the photograph). Her husband is a farmer. Doña Concha has been making bedrolls for approximately 20 years, as well as purses and fans. She learned this craft after taking a course at home that was being offered by the government. The loan she requested will be used to purchase more materials such as straw, string, paint, ribbons, and marsh lilies. By making these products, she hopes to preserve the traditions of her town. She sells her products directly to the public in order to avoid middlemen.

This group is very close and the members have known each other since birth. They help one another and wish they could thank Kiva in person for considering them and providing recognition of their work to the rest of the world.