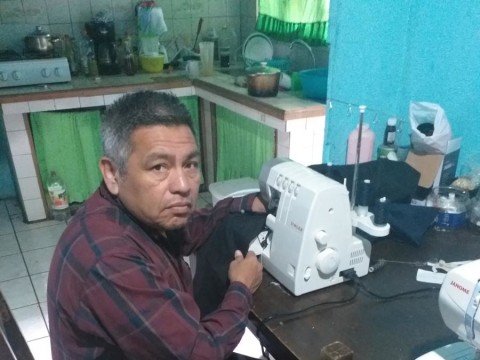 A loan helped to buy more fabric and thread of various colors, buttons, lace, and needles, among other items used for sewing uniforms.

At 55 years old Rafal is a complete professional at sewing uniforms, since he learned from his parents, and his wife and some of his neighbors continue to collaborate with him in his workshop cutting out and sewing uniforms.

Rafal obtained a previous Kiva loan through MiCredito, with which he bought thread, fabric, buttons, and needles. Due to high current demand from his customers, he is applying for a new Kiva loan through MiCredito, which he will use to buy thread and fabric of various colors, buttons, lace, and needles, among other accessories used for making uniforms, so that he can cover the needs of his customers.

In the future he would like to open a new workshop. He'd like to be able to offer employment to more migrant woman and so contribute to the economy of his family's country and the country of the women heads-of-household who collaborate with him in his business.