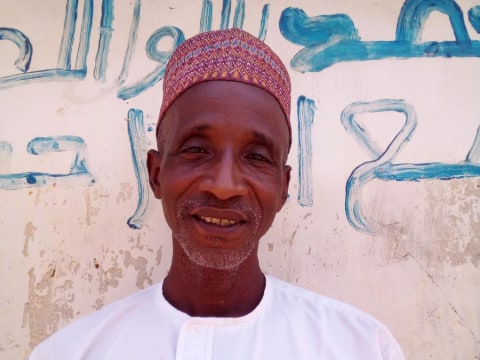 Dahiru's loan finished fundraising, but these other borrowers need your support

A loan helped to purchase improved farm inputs that will increase farm yield.

Dahiru is 49 years old and a hardworking maize farmer, who lives in a modest mud house with his wife and four children in a small village in Kaduna state.

Previously, despite toiling for long hours on his farm, Dahiru was only able to feed his family two meals a day. Now that he is a Babban Gona member, Dahiru will, because of this loan, be provided with higher yielding seeds that are locally adapted and are widely accepted in his local community. He will also have the recommended pesticides and fertilizers based on the results of his field assessment.

These inputs will enable Dahiru to optimize his yield, so he can attain yields of up to 3.8 metric tonnes per hectare; twice the national average in Nigeria. This loan will not only increase his income earnings 2.8 times the national average, but will also ensure that Dahiru can continue to provide for his family.

Dahiru will use the income generated from his maize sales this season to build a better house for his family. Dahiru is confident that with Babban Gona he will overcome poverty, securing a strong future for generations to come.