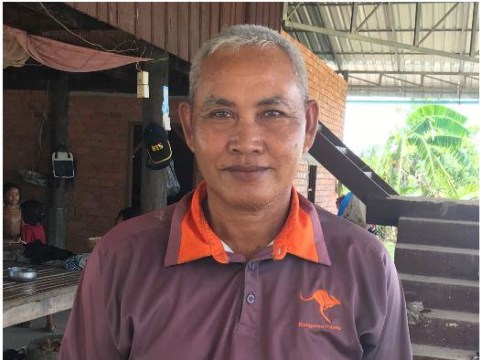 Met's loan finished fundraising, but these other borrowers need your support

A loan helped to dig a pond and pay for laborers.

Met, aged 57, is an experienced construction worker from a rural village of Chhuk district, Kampot province. He has been in the construction business for more than 5 years and also works as a paid laborer for additional income. He has a common law relationship with his wife, who is a loving mother of five children and who has the same business as he does.

He tries very hard everyday at construction sites to prepare construction supplies for building with seriousness and spends more than 8 hours per day making sure that his family members have enough food to eat.

Because of the shortage of his finances, he has applied for a loan in the amount of KHR 3,000,000 to dig a pond and pay for laborers. He is hoping that he won’t face a water shortage in the future or that he won't have to spend much time collecting water from distant areas anymore.

He expresses his thanks to all Kiva lenders for showing their interest in poor people like him to improve sanitation and provide safe drinking water for his family.