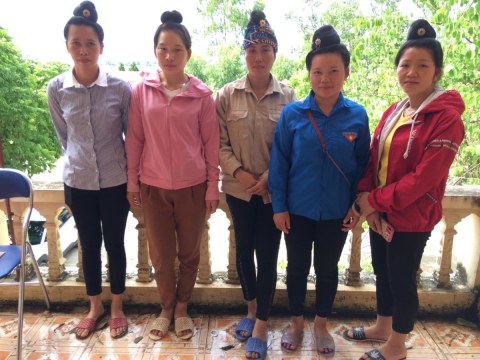 Thanh An 29 Group's loan finished fundraising, but these other borrowers need your support

A loan helped to buy goats.

Thu, 30, is an ethnic young Thai lady who lives in a small house with her husband and her two twin daughters. Her daughters are studying in the first grade of primary school. In the picture, she stands at the first from the right.

Her family mainly relies on agricultural production for a living. Because of the instability of their income from agriculture, Thu and her husband work very hard at many additional activities, including cultivating 1,000 square meters of rice and 100 square meters of vegetables. They're also raising 30 chickens, 10 ducks and a buffalo. Recently, Thu has requested her sixth loan from the Anh Chi Em Program in order to have enough money to buy goats to develop their farm. Thu is satisfied with the training and counseling provided by the program, which has helped her consistently overcome the difficulties in cultivation and animal husbandry, in order to make their production more efficient. Thu hopes that this investment will be as successful as the previous ones, so she can better provide for her family as well as pay for her daughter's education.