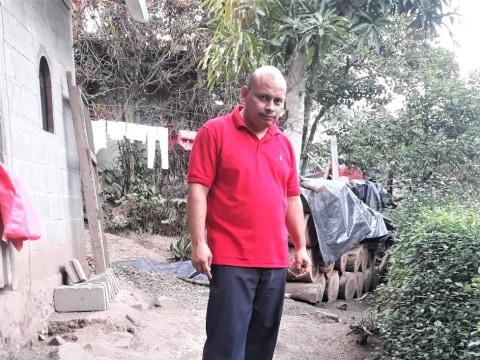 A loan helped to buy a toilet and a tank, both with their accessories, cement, pvc piping etc.

Mauro is 35 years old. He is married, and the father of two children. He is the descendant of a family of working farmers, principally in the production of basic staple foods and coffee.

Since he was a child, Mauro's main objective was to get ahead, and as his first choice, he chose the career of being a teacher. He began to work as a helper in construction so that he could study, traveling to another town where he got his secondary education. After his third year approved year he was given a posting to give primary classes. All of these efforts allowed him to obtain the title of Primary Teacher, and with these earnings he was able to continue his educational studies.

He has currently been working as a regular primary education teacher for eighteen years in the region where he was raised.

Mauro is requesting a Fundenuse loan with Kiva funds to install a septic tank and a toilet to improve his family's living conditions. His future plans are to have good conditions in his house for himself and his family.