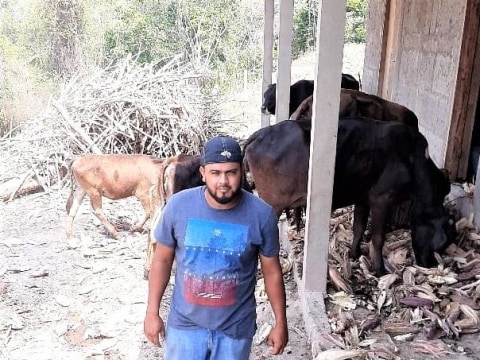 A loan helped to buy compost, fertilisers, herbicides, insecticides, fungicides and other items.

José is 31 years old and the father of four children. At the age of eighteen, he started being a small staple grains producer. His beginnings in agriculture were from when he was a child and he worked on his father's farm, as all his family are in agriculture. When he became independent from his father's business to start his own vegetable patch, he started sowing two acres.

With the profits from the farming production he has bought some cows where he can benefit from the milk, or buy and sell the cattle. He is asking for a loan from Fundenuse with Kiva funds to buy farming supplies, to sow corn and beans. This will support him in the best practice of growing corn, applying it in the key moments when the crop requires cultural work and agricultural management.

His next goal is the purchase of dairy cattle to increase his herd. His future plans are to be able to construct his own home to become independent from his parents.