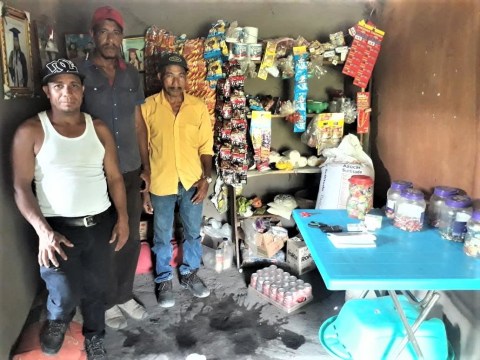 Eddy is 44 years old and has four children: three daughters and one son. Two of them are grown, and the other two are still economically dependent on him.

He started his convenience store business with money he had sent home to his wife while he worked abroad. At that time, there was no work in the community, so he decided to go to another country in search of better opportunities. He worked harvesting sugar cane. He began to save money and was able to send some to his wife so they could start their business. After he returned to his country, he eventually decided to seek a loan from FUNDENUSE in order to improve his inventory, which he has maintained.

With his earnings, he has been able to purchase a freezer and a refrigerator so that he can sell meat and dairy products. He also grows basic grains during the winter and butchers pigs during the temperate seasons, which helps him support his family.

He is seeking a new Kiva-funded FUNDENUSE loan in order to buy products he sells in his store. His plans for the future include being the owner of a large business, being able to offer a wide selection of basic necessities to his community, and improving his and his family's living conditions.

He belongs to the "United Men" solidarity group, along with José and Santos.