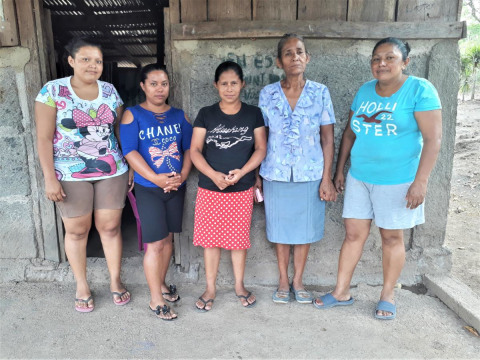 Yolanda is 40 years old, a single mother of two children, a trader and a farmer. She is a laboring woman who comments that she has worked hard in field work, especially in the coffee plantations where she cut coffee plants. With the money that she earned, she invested in the purchase of pigs and hens, which she sold in December. This way she saved money until she was able to purchase a manzana [1.7 acres] of land where she currently produces coffee.

After this she worked with pork offal and nacatamale [tamales filled with pieces of pork] which is her current business. She has other activities such as planting corn and beans, from which she obtains part of her food for her family. The left overs she sells as another source of income. She also sells coffee.

She is asking for a loan from Kiva to invest in the purchase of pork and ingredients to make nacatamales. She aspires to continue her business and construct a house since her current house is in bad condition. As a short term goal she wants to dabble in used clothing sales and diversify her sources of income.

She belongs to the solidary group "Rosas" together with María Elena, Indira, Oneyda, and María Idalia.