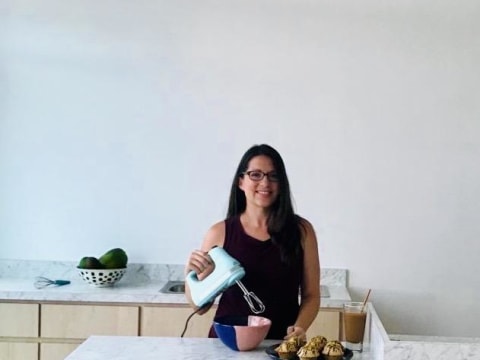 A loan helped to get my business ready to open.

Viviannette was raised in Moca, a small town in Puerto Rico, where from an early age she learned the value of education and hard work. She has a B.A. in Sociology from University of Puerto Rico and a M.A. in Latin American Studies from Indiana University. She also holds a yoga teacher certification from Siddhi Yoga International and a barista certification. She has had the rewarding opportunity to teach yoga in the US and Puerto Rico. Although she has a wide range of interests, coffee shops, baking and yoga have a special place in her heart. After completing her undergraduate degree she moved the United States so she could learn English and pursue a higher education degree. She lived in Bloomington, Indiana where she studied and taught as a Spanish Lecturer at Indiana University. When she was not teaching you could find her baking, reading a food magazine or at a local coffee shop, where there was a sense of community and felt like a second home. While she enjoyed her teaching job, hobbies and community, living outside her home country presented a challenge for her wellbeing, causing anxiety and depression. After tirelessly visiting many doctors and trying different treatments, she discovered the wonderful benefits of wellness practices such as yoga, mindfulness and healthy eating. For years, she dedicated herself daily to the practice of yoga, studying mindfulness practices and nutrition. Then decided to obtain a yoga teacher certification so she could take care of her mental wellbeing and help others. Unfortunately, right after yoga teacher training was over she suffered a leg injury and was unable to practice yoga or other physical activity for almost a year. She started to look for an alternative therapy and then rediscover her love for baking. During this time she worked on improving her baking skills, by practicing daily, preparing desserts for friends, watching countless videos and reading many baking books. However, this presented a new challenge, since many of the mainstream recipes were high in sugar, fats and offered very little nutritional value. Due to her condition and her commitment to live and promote a healthy lifestyle, she decided to focus on making desserts and foods that are reduced in sugar, fat and use ingredients that add nutritional value such as whole grains, fruits, healthy oils, yogurts, among others. It was during this time that her desire to return to Puerto Rico and having her own business grew stronger. She wanted to create a business that combined the things that she was most passionate about while making a positive contribution to her community. Recently she moved to Puerto Rico, where she has been able to reconnect to her community, teach yoga in local studios and share her baking with others. She is in the process of developing her first business, Café Yogini, a coffee shop and yoga studio in Aguadilla, Puerto Rico.