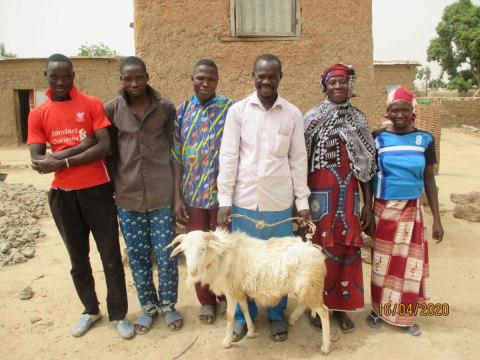 A loan helped to buy livestock for resale.

Seydou is the man holding onto the sheep in the photo. He is an ambitious farmer from Mali, 43 years old, married, and the father of 5 children, 4 of whom attend school. His wife is a housekeeper.

He farms sheep and goats. He buys and sells his livestock at the weekly markets in his zone. His farming business is worth his while because it enables him to cover his children's health and education expenses. Every eight months, after making his sales, he can make a profit of between 25,000 francs and 50,000 francs. Unfortunately, animal theft is a common problem in the area.

He has found his partnership with RMCR to be very beneficial because it enables him to gradually achieve his goals.

His dream is to build some large pens for his livestock and improve his business, and to pull himself out of poverty and achieve independence.