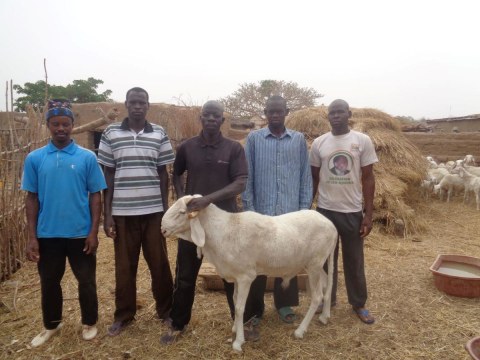 A loan helped to buy rams to resell in order to support his family.

Madou is the man pictured holding a ram by the horns. He is from Mali and raises livestock. He is not formally educated. Madou is 40 years old, married, and the father of ten children. His wife is a housekeeper.

Madou is a solvent client of RMCR and is bravely pursuing his business. He borrows money from RMCR to reinvest in his ovine raising business. He has been involved in this activity for over nine years now. He makes his purchases at markets in nearby towns and resells his animals at these markets or occasionally outside the country.

The profits that he makes will allow him to better satisfy the needs of his family and his children. He will also be able to improve his business by addressing his current lack of funds. Poor sales are the only problem with his business. In the future, Madou hopes to have a large sum of money to better meet his needs and those of his children.