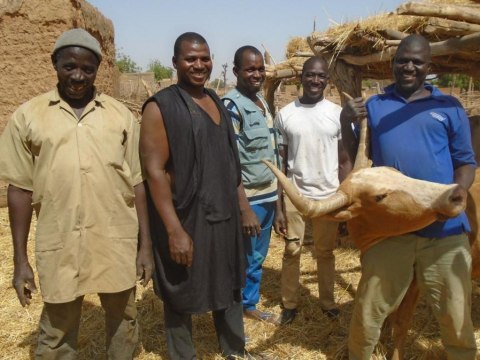 A loan helped to buy cows for resale in order to take responsibility for his family.

Badjan is the man holding the cow. He is literate and from Mali. He is forty years old, married and the father of eight children, four of whom attend school. Badjan has been raising animals for more than nine years. He raises cows for a few months at a time.

He buys and sells at different fairs, where he can make 7,500 West African CFA francs per head. He has encountered the following challenge over the course of his work: selling on credit to some of his customers who have not paid him back on time.

To grow his revenue, Badjan has turned to RMCR to grant him a loan. His aim in life is to prepare for his children's future in terms of education.