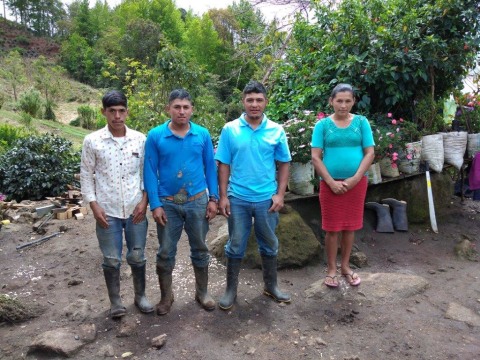 A loan helped to buy fertilizer to spread on his crops and thus improve the land.

Elvin is 30 years old. He is in a civil marriage, and lives with his two children and his wife in a community in the Gracias municipality, Lemira.

He has been farming for several years, and has been growing coffee for eight years. He has this crop on his land and harvests quality coffee beans which he sells in the local market. He has decided to seek a group loan in order to buy fertilizers to apply to his crops, thus improving his parcels. His plan is to increase production with this good assistance and to always have income for his family.

The group is named "Amigos del Roblón," and it consists of four members who live in the same community and who do the same work. The amount of the loan is 28,000 Lempiras, which will be invested in buying manure for their coffee crops.

In the photo, from left to right, are Isaías, Melvin, Elvin, and Gladis.