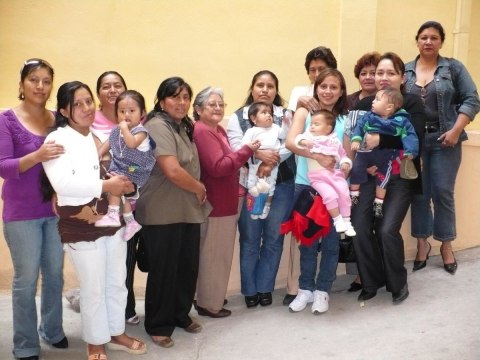 The Communal Bank “Virgen de Bronce” can be found in the city of Cuenca, which is in southern Ecuador and stands 2500 meters above sea level. The city is the cultural and sports capital of the country. In addition, it was named a World Heritage Site by UNESCO. Ecuadorians consider Cuenca to be the most beautiful city because of its natural landscapes and the surrounding rivers such as the Tomebamba, Yanuncay, Machángara, and Tarqui. They all merge to form the Paute River, which flows into the Amazon, the largest river in the world. The Communal Bank consists of women who strive each day to build a better future and bring about improvements in their families.

Norma B. lives in the “Virgen de Bronce” sector. She is 30 years old, married, and has two children (ages 10 and 8) who attend school in the city. Her husband is a bricklayer by profession. With great effort and sacrifice, Norma and her husband were able to build their own home.

Norma raises chickens and sells them plucked to her customers at the February 27th Market. She has been in this business for five years. Her mother and sister, who are also members of the Communal Bank, convinced her to apply for her first loan with the Foundation. The proceeds from her loan will be used to buy more chickens and poultry feed so that she can increase her business. Her goal is to study cosmetology and become a licensed beauty stylist.

Gabriela F. is also a member of this Communal Bank and has participated in three loan cycles. Her mother-in-law convinced her to join this group of determined enterprising women. She graduated from cosmetology school and has been working as a stylist since she was 18. Gabriela works from 9am to 7pm, Monday through Friday. She is 24 years old, in a common law marriage, and has two children (ages 5 and 1). Her oldest child attends kindergarten in the city, while her husband works as an electrician. She does not own a home, so she lives with her in-laws. With her new loan, Gabriela will buy provisions for her home. Her goal is to open her own beauty parlor.