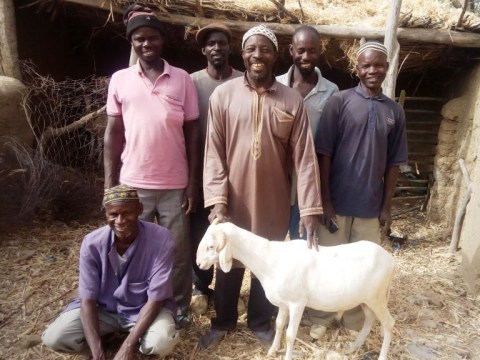 A loan helped to buy rams to resell.

Oumar is pictured with one hand on the ram and the other hand on the ram's horn. He is the representative for the Badenya group. Oumar raises bovine and ovine livestock. He is 55 years old, married, and the father of eight children between the ages of 3 and 16. Four of his children attend school. His wife is a housewife who also raises sheep.

Oumar is considered a kind, rigorous, and determined man by those who know him. He has been working in this field for over 23 years. He is resorting to a loan from RMCR to increase the number of oxen and sheep he is able to buy and raise with the goal of generating a better income. The profits he makes will enable him to cover his family's expenses such as medical costs, food, and school fees for his children.

Oumar stocks up on supplies from the markets in his area and makes his sales either in front of his home or at the large fair in his town. He can earn a bimonthly profit of approximately 80,000 Cfa, excluding expenses.