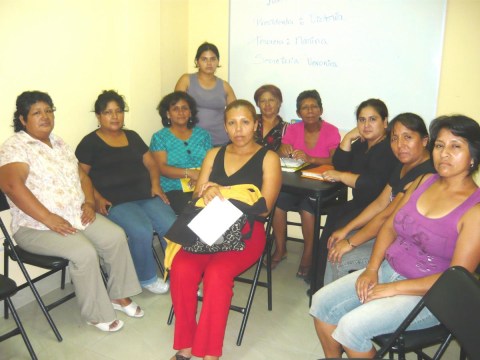 A loan helped Purchase fabric, zippers, thread, and other items.

Marina is a nurse by profession and pursued her career until she had her second child. She decided to quit her job so that she could devote herself to her family. Marina began sewing in her free time with the idea that it might prove to be useful someday. Her brother manufactures toy kangaroos, so she began working for him as a seamstress to earn some extra money. During this time, she continued to work until her brother convinced her to open her own workshop. Now she manufactures and sells toys kangaroos on her own and sells them wholesale to markets, stores, and businesses in the area. With her earnings, Marina has been able to help with her children’s education and complete the construction of her house. Even though her business experiences highs and lows, she has been able to maintain her customer base. Her workshop is currently located in her home, but later on she wants to have a larger place where her employees can work comfortably. Her goal is export her products, so she wants to be able to produce more items.

Sra. Marina serves as the treasurer for the group “Trabajando en Armonia” (Working in Harmony), which consists of eleven members who are all friends and live in the same neighborhood. The money she will receive will be used to buy supplies for manufacturing toy kangaroos such as fabric, zippers, thread, and other items. Marina knows that her business will grow in the future, so she continues to work tirelessly.

*Marina is the woman in the photograph wearing a fuchsia blouse.