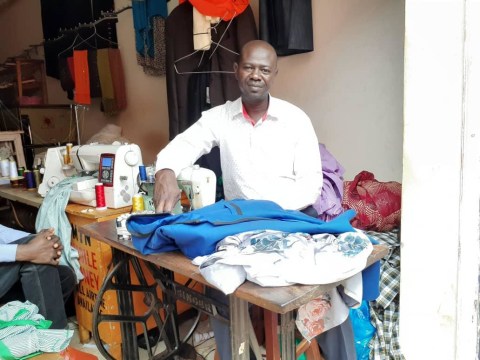 Ismail's loan finished fundraising, but these other borrowers need your support

A loan helped purchase an embroidery machine and a generator to keep working even when power is off.

Ismail is a resident of Buyala in Jinja district. He is a single father of three and a businessman, operating a tailoring business at a busy street in Jinja municipal council. He also owns a video hall in his home area of Buyala, where movies are played for people to watch. From this he earns some daily income to help him in the daily running of his home.

Ismail has a family of five, him inclusive, and a house helper who happens to be his sister's daughter, that he brought on board after his wife left due to uncertain explanations neglecting her children.

Ismail embarked on raising his children and dedicated himself towards working hard. He is also investing some of his business proceeds into small ventures, and of late has bought himself three refrigerators where soft drinks are cooled and sold to people that come to his video hall to watch football.

He has sought a loan of 3,000,000 UGX to help him purchase a machine which makes badges on uniforms for cooperate institutions, schools and other organizations that bring uniforms to his workplace. He will also purchase a generator which will help him out during power breakdowns in his area, since very many people in the area don’t have access to power.