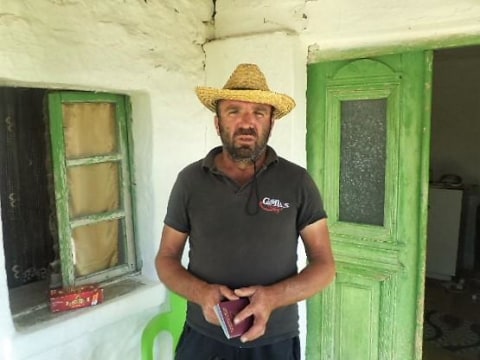 Beniamin's loan finished fundraising, but these other borrowers need your support

A loan helped to pay for a scheduled surgery.

Beniamin is a 56-year-old man from Korca. He is a very hard working man. He does different agricultural activities at his small village but also in Greece. Due to some health problems that Beniamin was having, doctors recommended he work less and perform easy labor activities.

Beniamon did not pay attention to their recommendations and continued his normal activity causing this was severe health problems. He now needs to have a surgery to recover his health and be able to lead a normal life. It is the sixth time that he is having a Kiva loan and the twelfth time from ASF.

Agriculture/livestock is the type of activity that he pursued during the past years. In the 9.5 dynym of land that he owns, he plants mainly wheat and corn and also fodder for animals (dairy cows). Last year's earnings from the activity in total were $3,790. One of his sons works as a waiter for a monthly pay of $107, which is below the minimum pay of $181 and kindly note that there are no gratuities in this job. His older son works as a mechanic at a clothing manufacturer in the nearby city for a monthly pay of $247.

Beniamin lives with his wife and with both of his single sons.