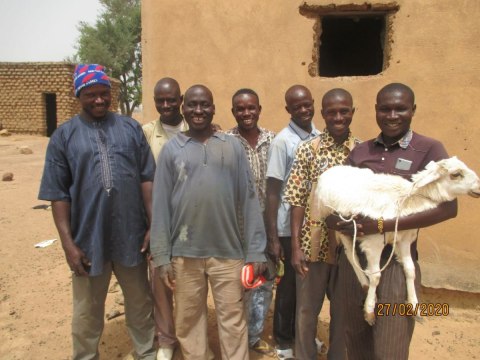 Benkan Group's loan finished fundraising, but these other borrowers need your support

A loan helped to buy animals for resale in order to buy land.

The man presenting the ram in the photo is named Kalifa. 42 years old, he lives in a rural environment, is married and the father of four children. The youngest is five and the oldest is 15. Two of them are boys and two girls. Of his children, the two boys are in school.
It has been 15 years that he has been running his business of raising sheep. He buys the small sheep at the local markets and raises them over a period in order to resell them at the same market with the goal of making a profit.
Kalifa is an old client of RMCR who makes his repayments on time. He is asking for a new loan in order to buy more head of sheep to raise, hoping to earn a profit of 50 000 FCFA and this will allow him to pay the school fees of his children. In the future, Kalifa is hoping to work to make more money with the goal of paying for residential land in a city.