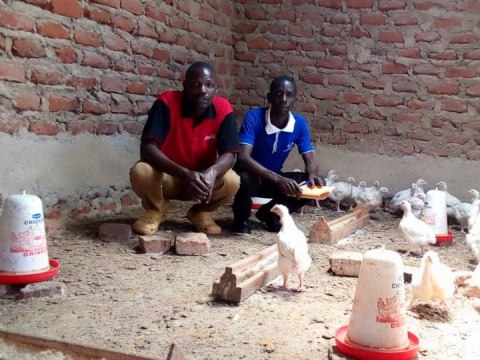 A loan helped to buy more birds and poultry feed.

German lives in Mbarara district and he has been in the same area for over 25 years. He is a farmer dealing mainly in poultry (broilers) on a large scale. He is married with four children and three are school-going. He normally sells to traders and hotels in big towns.

German is an established poultry farmer in the area of Mbarara and he normally sells 500 birds every month and gets at least 4,000,000 UGX. He is requesting the loan to buy poultry feed for his birds and restocking more birds, mainly layers to diversify his project.

His future plans are to buy a bigger land to expand his poultry project and construct big poultry houses. He plans to buy a farm to start cattle fattening and also construct rentals.He is seen squatting in a red shirt with the credit officer squatting in a blue shirt.