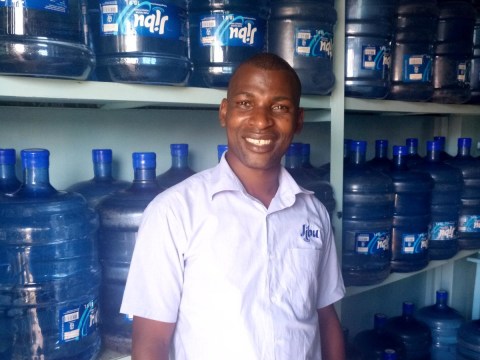 A loan helped to buy a delivery motorcycle to reach more customers who could not previously afford clean drinking water.

This is Robert's fourth loan from Kiva. The previous loans, which were for two tuk tuks and additional inventory, have been the biggest contributors to his current success. Since Robert got the previous Kiva loans, the number of customers that he supplies water to has grown tremendously. His sales volume has more than tripled, and he has been able to come up with delivery schedules to get his customers their water on time.

Robert has identified that he spends a lot of money on emergency deliveries of water to customers who are not within the planned schedule because he has to keep hiring motorcycles in order to make these deliveries.

This loan will help Robert to acquire a motorcycle that will save him on high costs incurred during emergency deliveries to customers as well as costs incurred while picking up inventory.