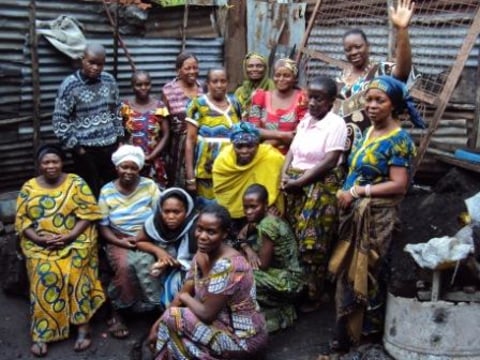 Hodari Group's loan finished fundraising, but these other borrowers need your support

Kapinga M. is vice-president of the Hodari credit loan group. A smiling giant of a woman (she is seen raising her hand on the picture), currently in her 11th loan cycle, she is a 36-year-old widow, the mother of seven children all attending school: four in the primary and three in the secondary school system. Her husband passed away 25 January 2005 in Kigali (Rwanda) following a prolonged lung-related illness. She has been the sole support of her children these past five years, which weighs heavily on the rapid expansion of her business. Her business is free-style in nature, itinerant without a fixed location. She provides bed sheets, children’s clothing, pagnes and boubous (colourful West-African clothing), and gold jewelry to all who are interested. It has now been five years since she began an activity known as “lutte-lutte pita pita”. She used to live in Kigali, where most of her in-laws reside, and following her husband’s death, without any savings, she began weaving clothes and tablecloths, etc. The earnings from this activity (craft) enabled her to move from Rwanda to the Democratic Republic of Congo with her children, where with her remaining $50 she was able to settle in a guesthouse. She started to trade in tomatoes, gasoline, salt, milk, powdered detergent (OMO). Then she learned that the Hekima MFI provided loans without collateral, and she was granted her first reinforcement loan. She had just re-established some financial balance when she became one of many victims of the 8 July 2009 fire that destroyed over 900 homes in Goma, inside the Birere shanty-town. With the Hekima MFI loan Kapinga M. wishes to increase her turnover by buying 6 pairs of bedsheets, a half-dozen gold chains (locally called “Garantie manzanza”), a half-dozen quality dresses from Congo Brazzaville, and six pagnes. She is also an Evangelist acolyte in a local church (Christ is King) and sometimes participates in “Spiritual Combat”, a Christian revivalist ministry. She is comfortable with how her business is going, and in the future envisions buying a plot of land as inheritance for her children and eventually renting out as a property owner. Additionally she hopes to see all of her children finish their studies with diplomas that will serve them in their future. Kapinga M. thanks the Hekima MFI for the loans she has received without any collateral because that is what enabled her to meet her children’s needs. She was finally able to enjoy relief and financial stability for the first time since her husband’s death, thanks to Hekima’s loans. The Hodari loan group is made up of 15 members, for the most part women.