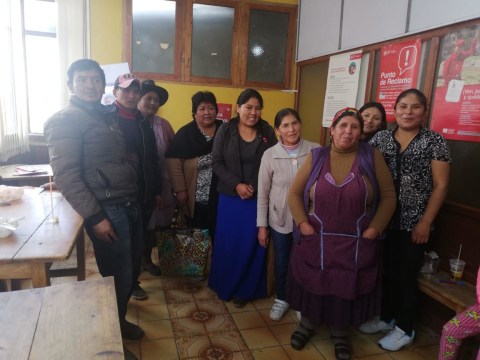 Clotilde is 61 years old. She's divorced and has 7 children of different ages. She makes a living selling candy and sweets from a kiosk near a stadium. She did housekeeping at first. While working, she was told there was an opportunity to be a keeper in the arena. This was an advantage for her because she could stop paying rent. Two years ago, she had the idea of selling sweets in the arena since those who came to watch the games always bought something. She did well and was able to help her older children become professionals. She still has more children to help but she does well in her business.

Clotilde wakes up very early since those who rent the arena start to play at 6 a.m. and stay until 11 p.m. Therefore, she gets up at 5 a.m. to clean the arena and set up her kiosk. She prepares breakfast for her children and then lunch. She sometimes goes shopping but can't take long since the customers at the stadium are very demanding.

She previously received a loan through Pro Mujer which she used to purchase used clothing which she sells in Belen and Betanzos on Saturdays. Doing this helped her to overcome the financial crisis that her divorce caused. Her personal goals are to buy a house and see that the four children who are not yet professionals, become professionals. She also dreams of having a large store.