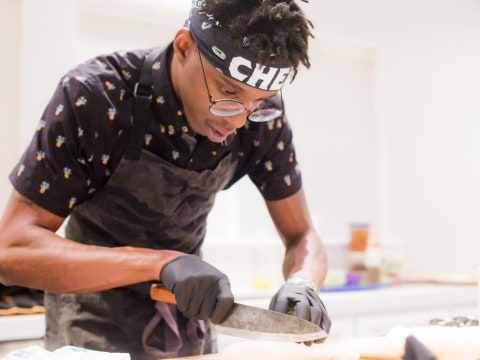 A loan helped a self-made chef of the stars take his international cuisine across the country.

I first gained my passion for seasonal cuisine at a young age thanks to my mother. Growing up in the farmland of the Midwest, my mother was fond of seasonal cuisine as she only used ingredients that were grown during specific times of the year. Since we lived in Maryland, where seafood is abundant, she would always make food from the freshest seafood, and I couldn’t help but to be captivated by the unique charm of seasonal cuisine. Continuing my passion, I went to a culinary institute in Philadelphia, but my professor encouraged me to drop out as I was working as a private chef while being a full-time student. However, I was soon employed as a chef at restaurants. In 2013, I moved to California, and I began to have visions for my own business. I started to save money to make those visions come true. However, I had to make several sacrifices, including quitting jobs that I had at that time. My business had gained a solid start through my first Kiva loan, which I have repaid back in its entirety as of last December. My passion for the culinary business lies within providing people the opportunity to try food that they are not familiar with—especially food from my own culture. I also believe in making positive social impacts, so I teach kids’ cooking class for free; I plan to expand this program as my business expands as well.