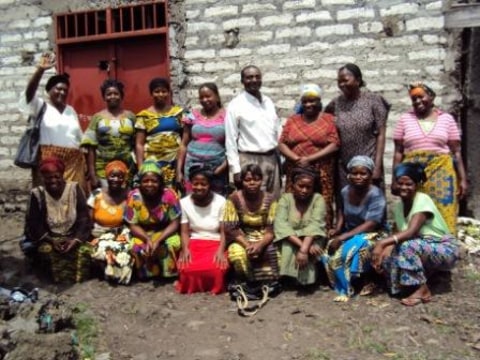 Chikwanine C. C. is the president of the lending group Shangilieni.  (Her hand is raised in the photo.)  She is a 15th cycle client and is 45 years old, a widow, and the mother of seven children, who are all studying in écoles normales (post-secondary colleges).  Five years ago (in 2005), her husband died after a brief illness.  During these five years, she alone has been supporting her orphaned children.  This responsibility weighs heavily upon the rapid growth of her business.  Her business is a mini hardware store displaying goods openly at the market in the Himbi Alanine sector.  She has been in this business for eight years.  She started her small business with her own funds received from her husband following his death.  The initial capital amounted to $200. But with her husband's death, she experienced such upheaval, and her work tumbled. C., with the loan from the micro-finance institution Hekima, wishes to increase her sales by buying ten rolls of electrical wire valued at $500 and six dozen saws valued at $200.  She also sells Fanta and Primus beers out of her home in order to increase her income, to respond to minor emergencies, and to cover household necessities.  In the future, C. plans to find an outlet for her hardware goods to display on the main boulevard of the Katindo line.  She can then be more competitive in this business and engender good business connections with the builders and major merchants of the city.  Later on, she wishes to construct a small shop at home to take care of her children and to maximize large profits in additional to those from the hardware store. C. thanks the IMF Hekima for the loans she receives without the need for any collateral at all.  Thanks to these loans, she managed to build a 10-room house made of boards that she rents out.  The rental income from this house enables her to meet the needs of her children. In addition, C. has found relief with ease and has gained financial stability, thanks to Hekima loans following her husband's death.  Currently, her business is advancing.  The Shangilieni lending group is composed of sixteen members, most of whom are women.