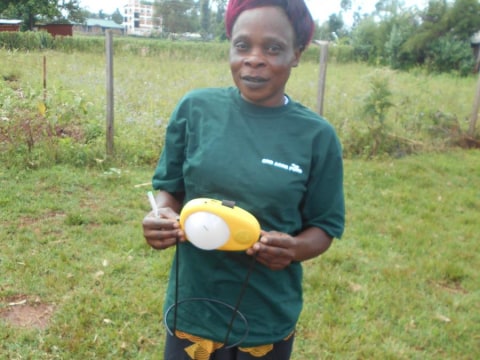 Colletar's Group's loan finished fundraising, but these other borrowers need your support

A loan helped to buy cost-efficient maize seeds and fertilizer for the coming harvest season, as well as a solar light.

Colletar is a 45-year-old proud mother of four children. She is a group leader, often described as a very resourceful person, and is representing her group of nine farmers in Lugari District. Since joining One Acre Fund in 2015, Colletar has noticed that she has been able to consistently feed her family.

Colletar described her harvest as very good last year, but believes she can have a better one this year by continuing to work with One Acre Fund. She is very excited to also be purchasing a solar light, apart from fertilizer and maize, because she will now be able to reduce her consumption of paraffin fuel and therefore save more money. With the profits from this season’s harvest, she plans to buy more land to cultivate.

With this loan, Colletar’s Group will be able to plant a total of three acres of land and purchase a total of four solar lights.