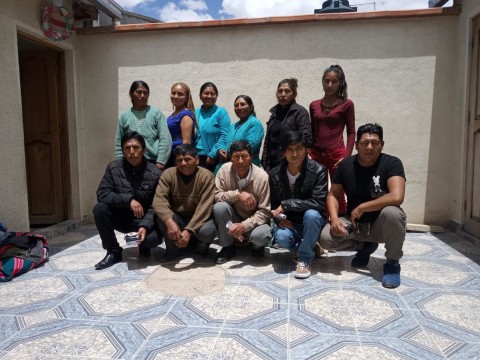 Amigos Responsables Group's loan finished fundraising, but these other borrowers need your support

A loan helped to increase her capital and bring more merchandise.

Margoth is the treasurer of the Amigos Responsables Communal Bank.

Margoth is a young woman, age 31. At age 6, after the death of her father, she had to move to the city of Cochabamba for economic reasons. Her mother worked as a merchant, and that's where, at a young age, she acquired the skills of this occupation. At 19, she met the one she thought was her ideal partner, and she had three children with him. They moved to her city of origin, Oruro, and had three children: Kim, age 10; Derek, age 8; and Kendra. But at Kendra's birth she had a lot of problems with her partner, and unfortunately, her mother passed away during this time. In spite of this pain, she remembered her mother's advice, "My children are worth any sacrifice." She decided to travel to the neighboring country of Peru or Chile in order to bring and begin to sell a variety of merchandise.

Margoth says that she sells more on foot in the different markets of the city, and it's there that she generates the income to provide for her three children. She wakes at 5:00 in the morning in order to prepare breakfast and leave lunch prepared for her children, since her cousins care for them during the day. Twice a month she travels to Peru and Chile to bring her merchandise.

The loan that she will seek is for increasing her capital and to bring more merchandise. Margoth wants to have her own house for her children, and to give them the best education possible.