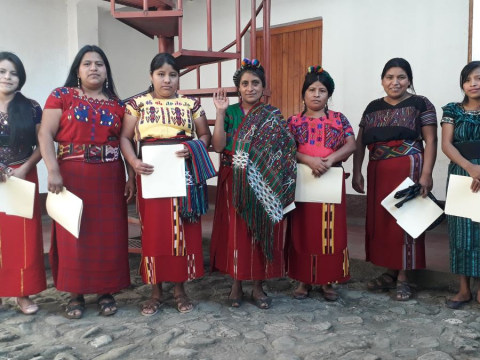 Canela 2 Group's loan finished fundraising, but these other borrowers need your support

A loan helped to expand her business weaving huipils by buying thread.

Juana is 51 years old. She was the youngest daughter. Her father died when she was eight, and a year later, when she was nine, her mother died. Her brother took care of her. She could not study, so she is illiterate, as she did not have the opportunity of studying. She learned the crafts of the house and weaving.

To help her brother with his expenses, she began to buy and sell huipils, first in her own village, then she began to travel to Panajachel and Antigua Guatemala, so she could sell the huipils and get a better price.

One of her sisters told her about the Chajulense Association of Women United for Life credits. This year she got her third credit. She has invested all of them in buying thread to fabricate huipils, expanding her activity selling huipils.

Juana is the leader of Canela 2. The group is integrated by seven women, six from the Ixil Maya ethnicity and one from K’iche’ Maya ethnicity. The group will use their loan for textile 29%, agriculture 29%, food 14% and retail 28%. On average, each member of the group has four children, and the average age of the members of the group is 32 years old. 72% are illiterate, 14% finished their primary education, and 14% studied to the ninth grade.