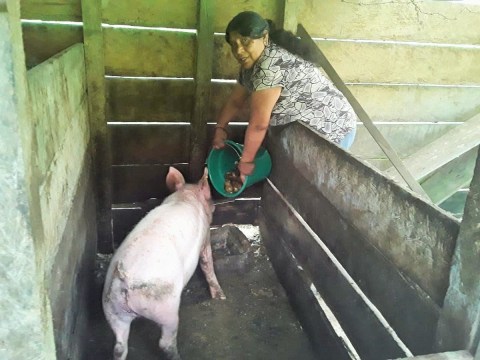 Ana Isabel's loan finished fundraising, but these other borrowers need your support

A loan helped to buy pigs and agricultural inputs.

Ana is 69-year-old senior. She is a fighter, a charismatic and sociable woman who has always fought to provide for her children as she has always been a single mother. She has raised her children to have values ​​and gave them a lot of affection. Though she went through many adversities, she never let those get her down and found a way to finish educating her children. Ana currently works only to support herself since her children formed their own homes. They visit and keep in contact with her but they are already as Ana says "flour from another sack". She works raising pigs. This is her main source of income to live so Ana asks humbly for help with which she can buy pigs and agricultural inputs to take care of her animals so that they can be sold for a good price in the market when it comes time to sell them.