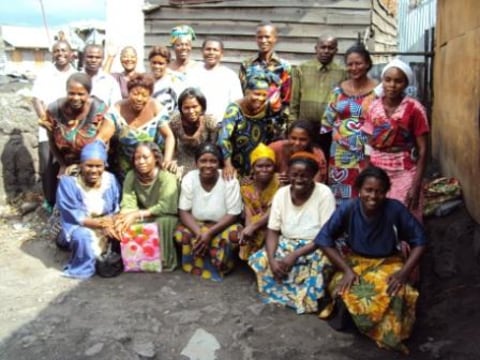 Tuongozane Group's loan finished fundraising, but these other borrowers need your support

A loan helped 24 containers of palm oil and 30 pairs of plastic sandals.

Mwadji M. is president of the Tuongozane credit loan group (she is seen raising her hand on the picture). She is in her 13th credit loan cycle, is 50 years old and the mother of eight children, of whom three study in an auto mechanics training centre, two in the standard school system, two stay in the village and work in the fields, and one does not attend school. Her husband runs a small business. She began her own business with funds received from her husband. With this starting capital she purchased a container of palm oil worth $12. Her business is retailing palm oil at the central market in Virunga, which she has done for the past eight years. With the loan from the Hekima MFI Mwadji M. wants to increase her turnover by purchasing 24 containers of palm oil and 30 pairs of plastic sandals. She also sells plastic sandals locally called “bodaboda” or “soza” to increase her income. For the future, she plans to change activities and go into general commerce, getting her supplies from Kampala in Uganda. Eventually, she wants to build a comfortable home. Mwadji M. thanks the Hekima MFI for the loans she has received although she had no collateral, because they enabled her to meet her children’s needs. What’s more, she was separated for quite some time from her children due to the war in the Democratic Republic of Congo (DRC), and the Hekima loans allowed her to pay for her children’s plane fare from Buyimayi to Goma.