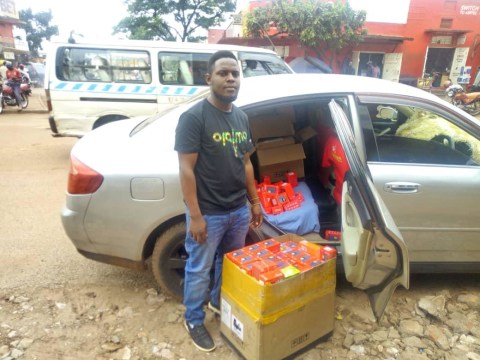 Emmanuel's loan finished fundraising, but these other borrowers need your support

Emmanuel is 28 years old, a resident of Zabef in Jinja district. Emmanuel is a business man who trades phone accessories like memory cards, headsets, flash disks, and phones. He purchases them from Kampala and takes them to Iganga, Kamuli and other areas surrounding Jinja, where he sells them and at times distributes them on credit where they are sold on his behalf and he is paid later.

From this business he has been able to purchase himself some household items like a television set, sofa set, and hoofers and he is able to pay his own rent dues and also provide for his mother, who also operates a market stall. He is an inspiration to the village youths who have also resorted to self employment due to Emmanuel's good personality.

He recently purchased a piece of land in Danida where he plans to set up two rental units. He plans to occupy one and rent out one for income.

He has sought a loan of 3,000,000 (three million Ugandan shillings) to help him purchase construction material to kick start the construction process. He will also use it to invest some money in phone accessories because he is now looking at minimizing the expenses he incurs on rent, which also comes with uncertainties like rental increases by landlords.