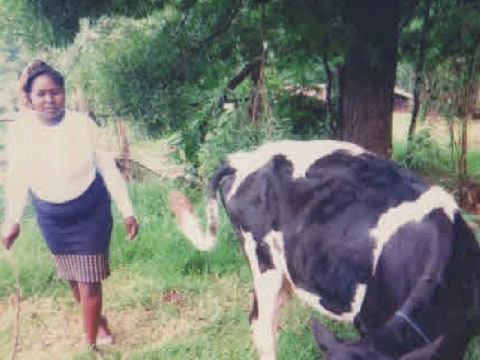 Jemimah's loan finished fundraising, but these other borrowers need your support

A loan helped a single mom to buy cereal grains such as corn and beans from local farmers and resell them to make an income to sustain her children.

Jemimah, 19 years old, is a witty single mother of three from a remote village in Bomet, Kenya. She has defied the common thinking among Kenyans that agriculture is for the older generation.

Her major source of income is selling what her farm produces, such as corn and milk. With the profit she has earned from her farming enterprise, Jemimah has been able to provide for her family.

Although Jemimah has been making profits from farming, she has also identified a market for selling cereals. The only big challenge she faces in this endeavor is a lack of funds. She is requesting a loan to buy cereals, intending to buy different varieties of cereals, including maize and beans, to sell in the local market.

The market for cereals is never a problem because the demand is always high, and Jemimah plans to take advantage of that. Her marketing skills will enable her to attract more customers.

This is not just a loan to Jemimah. It is an opportunity to give a poor woman a way to elevate her standard of living and eventually lift her out of poverty.