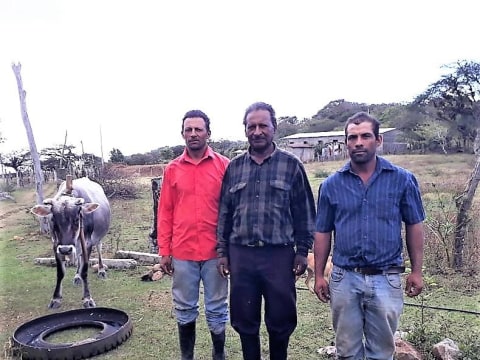 Bernardino, 60, is married and father to seven children. He has been engaged in the pig and cattle trade for thirty-one years. He started his business primarily with the purchase and sale of pigs and later invested in buying and selling cattle, activities he still does. During the season, he works in agriculture in the cultivation of basic grains, and he also works as a domestic on farms adjacent to the community where he lives.

Bernardino belongs to the solidarity “El Pino Uno” group along with two other members, Yorling and Jesús. With the previous Kiva loan, he managed to improve his business because his profits increased, and he bought a heifer, which is pregnant. He is very grateful to the Kiva investors for helping him to continue making a decent living. He is requesting his second loan from Fundenuse to buy a bull calf to fatten. His next goal is to breed pigs and fatten and sell them to the country’s markets. In the future, he wishes to have his own farm with various breeds of cattle and pigs.