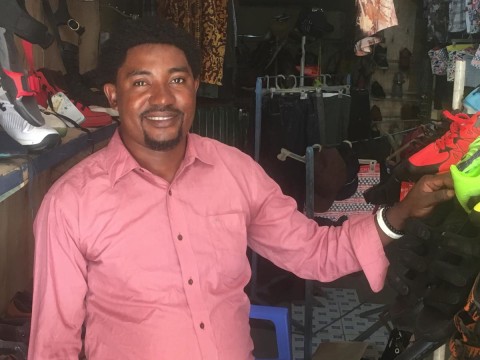 Olivier's loan finished fundraising, but these other borrowers need your support

A loan helped to increase his working capital to meet the demands of his customers.

Olivier is a motivated entrepreneur who runs a clothing and shoe shop. Olivier is originally from Congo, but he came to Kenya due to political instabilities, and he is now part of the refugees living in Kakuma 1 refugee camp in Kenya.

Oliver left his home country unprepared and he just had his small savings from his previous occupation. Instead of using the savings to support his daily expenses, he decided to invest them in a shop, and now he sees that he made the best decision for securing his future. Understanding the power of access to finances, he is also a mobile money agent, where people can debit and credit from him in the camp.

Eight years later, Oliver's shop business has grown drastically; he has been able to secure loyal clients who buy in large quantities. However, Oliver has a growing environment of customers so he sometimes runs out of stock to satisfy them. A loan to him would help in increasing his inventory to satisfy market demand.