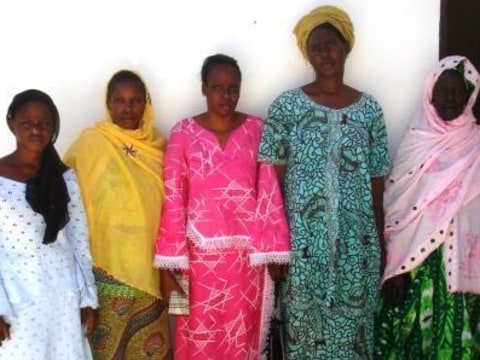 A loan helped get supplies of merchandise.

As its name suggests, Femmes Commerçantes is a network of businesswomen, It is based at Grand Thiès and was created in 1992 by Ms. Maty Niakh, its current president. She got the idea of forming the network after participating in a training session run by Oxfam at Thiès, in which she became familiar with group organization and running a business. The members of the group are dedicated to what they do, and meet together once a month. Over and above membership dues, each of them pays 200 FCFA a month into a group operating fund. Looking for financing, they decided to join U-IMCEC. The network is divided into 19 subgroups of five people so that financing can be better handled. Each subgroup has its own president and treasurer. They now seek, for the second time, a loan of 100,000 FCFA per member or 500,000 FCFA for each subgroup, to grow their various activities. The members repay their loans to the president and the treasurer, Ms. Coumba Seck. They, in turn, are responsible for repaying U-IMCEC. According to the president, the group’s praiseworthy objective is to fight family poverty. The subgroup Femmes Commerçantes N° 4 consists of the president Ms. Fatoumata T., the treasurer Ms. Aïssatou W. (both retailers of clothing fabric), Ms. Rokhaya F. a vendor of vegetables, Ms. Aminata D. who sells smoked fish, and Ms. Ndeye Khady D. who sells dried fish. The president Fatoumata T. has been selling Wax and Basin types of clothing fabric for the past six years. She gets her supplies outside Senegal, from Rosso in Mauritania. From time to time she varies her business by retailing roasted peanuts in her neighborhood in Grand Thiès. She is 42 years old, married and the mother of three children aged 13, 8, and 5 years.