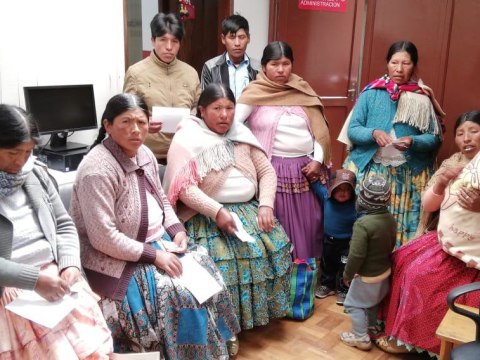 The San Agustin de Pillapi II communal bank, as part of the Agencia Copacabana, is made up of eight members who are friends and neighbors from the area. It is led by officers, of whom Graciela is the president.

Graciela, 38 years old, is married and has three children. Currently, she has a business selling cheese. She states that she learned this business a long time ago.

The loan she will get now will be to increase her capital to purchase cattle, which she will get from the wholesalers in the city of La Paz. Later, this will serve her as a means of production. This type of work allows her to generate resources to support her family financially. Her aspirations are to have a larger store to sell cheese and milk. Graciela asks that you trust in her communal bank again.

Note - In the photo, Elsa has her two-month-old baby in arms who is in the photo, and Wilma is with her two children, ages four and five, who are in the photo.