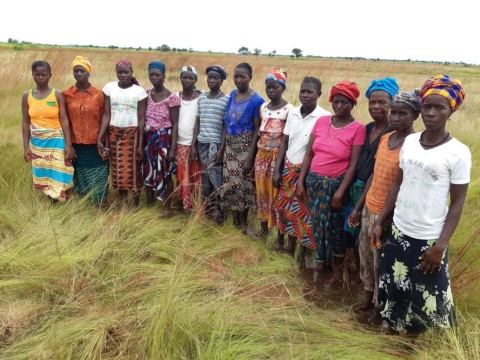 Memunatu (first on left), featured borrower of Memunatu's Female Farmers group, is a 37-year-old Master Farmer in Makaray village and has a family of seven. She is a proud farmer who has done well for herself and the community, and helps organize activities for young women to assist them in learning how to farm.

Despite being a seasoned farmer, Memunatu - like many in her village - had her farming devastated during Sierra Leone's 2014-2016 Ebola crisis. She refuses to give up despite losing a lifetime of work, and has organized a large group of other women who similarly had prospered before the crisis. They lost everything but now will not give up. All members are currently trapped in a cycle of subsistence and take extremely high-interest loans for poor quality inputs during planting time. A no-interest Kiva loan will enable this group of determined women to get back on their feet and back in business.