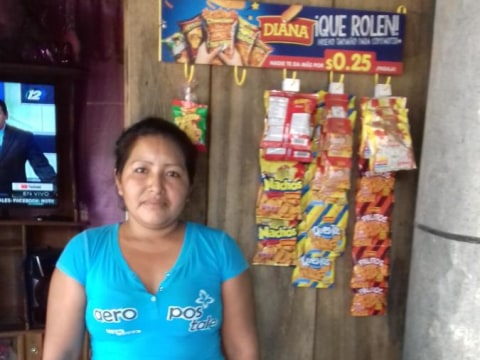 Blanca Noemy's loan finished fundraising, but these other borrowers need your support

Blanca went to school until sixth grade. She is now married and her husband earns his living as a farmer. Blanca has three school-aged children.

Blanca has earned her living making and selling tamales for the last three-and-a-half years. She learned the trade from her mother. Blanca starts work at 4:30 in the morning, which is when she prepares the ingredients for the tamales. At 2:00 in the afternoon, she goes out to sell the tamales and returns home at 5:00 pm. Additionally, a year and a half ago she opened a small store that sells staple goods. And she makes fried corn and yucca cakes.

Blanca is requesting this loan so she can purchase rice, beans, cooking oil, sugar, soap, detergents, sweets etc. to stock up her store. Her hopes are to have a larger store and for her children to have careers.