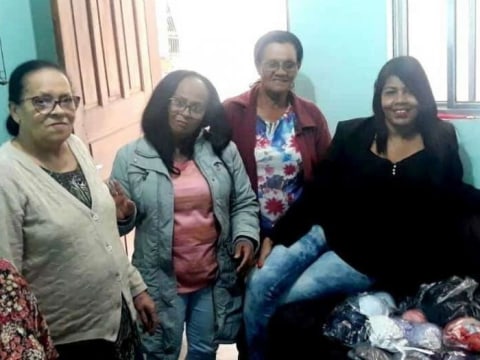 Unidas I Group's loan finished fundraising, but these other borrowers need your support

Célia, the third one from the right to the left, is married. She livres together with the husband and her children are already married. The house is her own.
Célia has always been working as a hairdresser. She put up a salon in her house and four years ago she discovered a breast cancer. Since then she passed the salon over to her daughter and with her husband's help she is cured. Twice a year she is taking routine exams and thank God she is cured.
During the treatment in the hospital, together with other patients, she learned to do handcrafts with EBS.

Since then she contributes to the living expenses with her manual work, which has begun to be a therapy of life as well.
She sais that she likes a lot what she is doing and she feels useful and fulfilled.
Two years ago one of her daughters discovered a tumor as well. She receives treatments and is in good health.
With the loan she is going to buy raw materials (EBS, glue, ribbons, tapes).
The group has six women, who are fighters and very strong.
Matilde sells cheese and lingerie, Clarice sells lingerie and tupperware. Julieta sells Yakult. Adelucia sells beverages. Maria Aparecida is a masseuse.