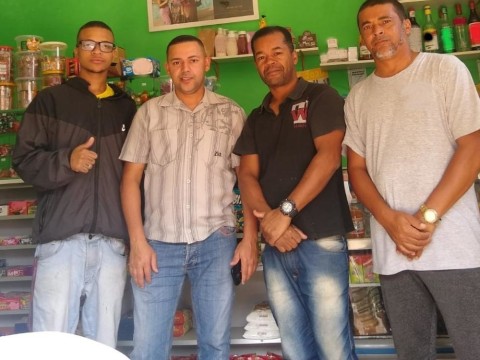 Amigos Do Jd Das Palmas Group's loan finished fundraising, but these other borrowers need your support

A loan helped to buy products such as gel, pomades, Progressivas [hair smoothing treatment], and also to do some renovations to the barber shop.

Decivaldo, the second in the photo from left to right, in the light striped shirt, is the group's leader.

He worked a long time as a waiter but realized that he was not achieving his dream of building his own house although he already had a nice plot of land. So he decided to take a barber course which was something he had always admired. When he finished his course, he quit his job and rented a space to open a barber shop. During that time he was building his house and he made an extra room to set up his shop so he could give up the rented space. Shortly after that, some friends told him about the Banco do Povo and invited him to join their group. He then he began to have more capital to invest in improving his business. Now he is also very grateful for the opportunity he has to raise capital through the Kiva investors. He will use the loan to buy products such as gel, pomades, and progressivas [hair smoothing products], and also to renovate the shop a little.

The group has four people: Abrao is a baker; Matheus is a barber; and Rodrigo has a snack bar.