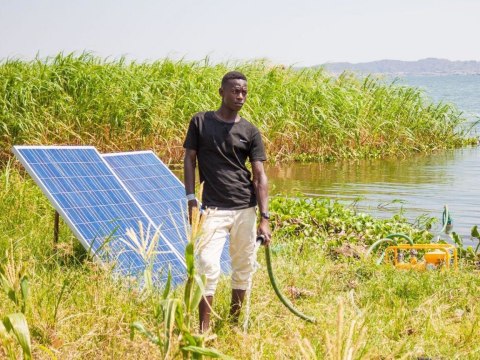 A loan helped farmers and fishers in Tanzania to earn more income with solar water pumps and fishing lights.

This loan may have a higher risk but higher impact. Learn more here. This is the third Kiva loan to Simusolar. View Simusolar's last loan here. In Sub-Saharan Africa smallholder farmers face incredible odds, in part due to increasingly unpredictable rains. Only 2% of farmers use any form of irrigation. Likewise, fishers spend one-third of their income on highly-polluting kerosene lanterns. Equipment is key to productivity gains for poor and rural famers and fishers. They lack access to the capital and proper equipment to implement productive systems. Based in Tanzania, Simusolar provides rural farmers and fishers with irrigation water pumps, solar home systems, and fishing lights on credit. They serve a large proportion of low-income households in 15 regions of Tanzania. Ninety-four percent of farmers that use Simusolar products report increased yields and 100% reported increased income. 78% of fishers have received their first access to products on credit from Simusolar, and 97% report increased income. To date, Simusolar has provided over 8,000 productive solar assets which have displaced 18,700 tonnes of carbon dioxide. This Kiva loan of $100,000 will finance solar water pumps and components that will support employment and increased income for over 600 rural households, impacting an estimated 3,220 Tanzanians.