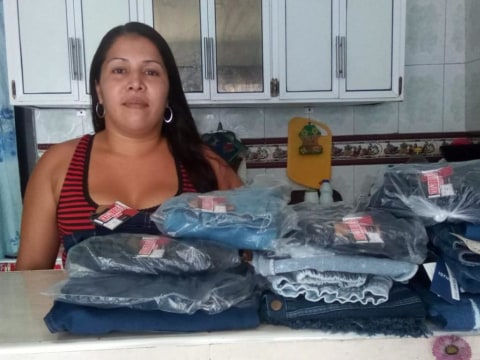 Jenifer Esther's loan finished fundraising, but these other borrowers need your support

A loan helped to invest in buying purses, clothing for women and men, and shoes for women such as high heels, tennis shoes, platform shoes, etc.

Jenifer Esther is a 31-year-old micro-entrepreneur who lives in the town of Soledad, Colombia, along with her partner. Thanks to some capital, she opened an internet cafe with the aim of generating income to cover household expenses. However, after having been operating well for some time, she became the victim of repeated robberies, which provoked income loss. Jenifer Esther was motivated by her family via a small bit of capital that they had saved to invest in a new business selling shoes, clothing, purses, and accessories. She sells them via the internet and on social media. She has been working in this field for five years now and her customers are family members, friends, neighbors, and people who find her products on the web. She wants to take advantage of the growth she has been seeing and the upcoming season in order to request her first Kiva loan in order to invest in buying purses, clothing for women and men, and shoes for women such as high heels, tennis shoes, platform shoes, etc. Support her in this loan.